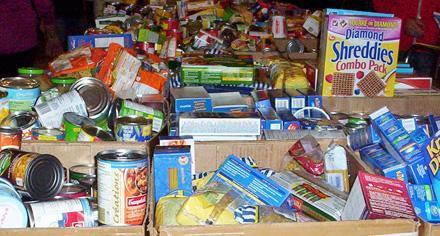 The campaign to collect non-perishable food and clothing, gathered by the Raelians of Canada, as part of their social solidarity campaign 2014, ended on November 16th. Nearly 250 kg were garnered this year.

True to their values of love, support, and sharing, the Raelians have demonstrated generosity by contributing towards alleviating the suffering of other humans. One of the core values of Raelism is sharing, and for over 40 years now, we have been standing for the principle that every human being is entitled, throughout his life, to decently feed and clothe himself, to a comfortable place to sleep and to receive a good education, even if he does not work or if his work does not currently allow him to reach this minimum. 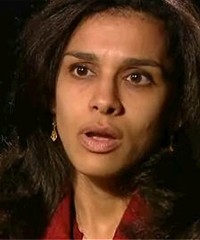 Dahlia Wasfi is an Iraqi-American physician and peace activist, born in 1971 in New York to a Jewish-American mother and Muslim Iraqi father, Dr. Wasfi spent part of her early childhood living in Iraq under Saddam Hussein. She returned to the US at age 5, earned her B.A. in Biology from Swarthmore College in 1993 and her medical degree from the University of Pennsylvania in 1997. 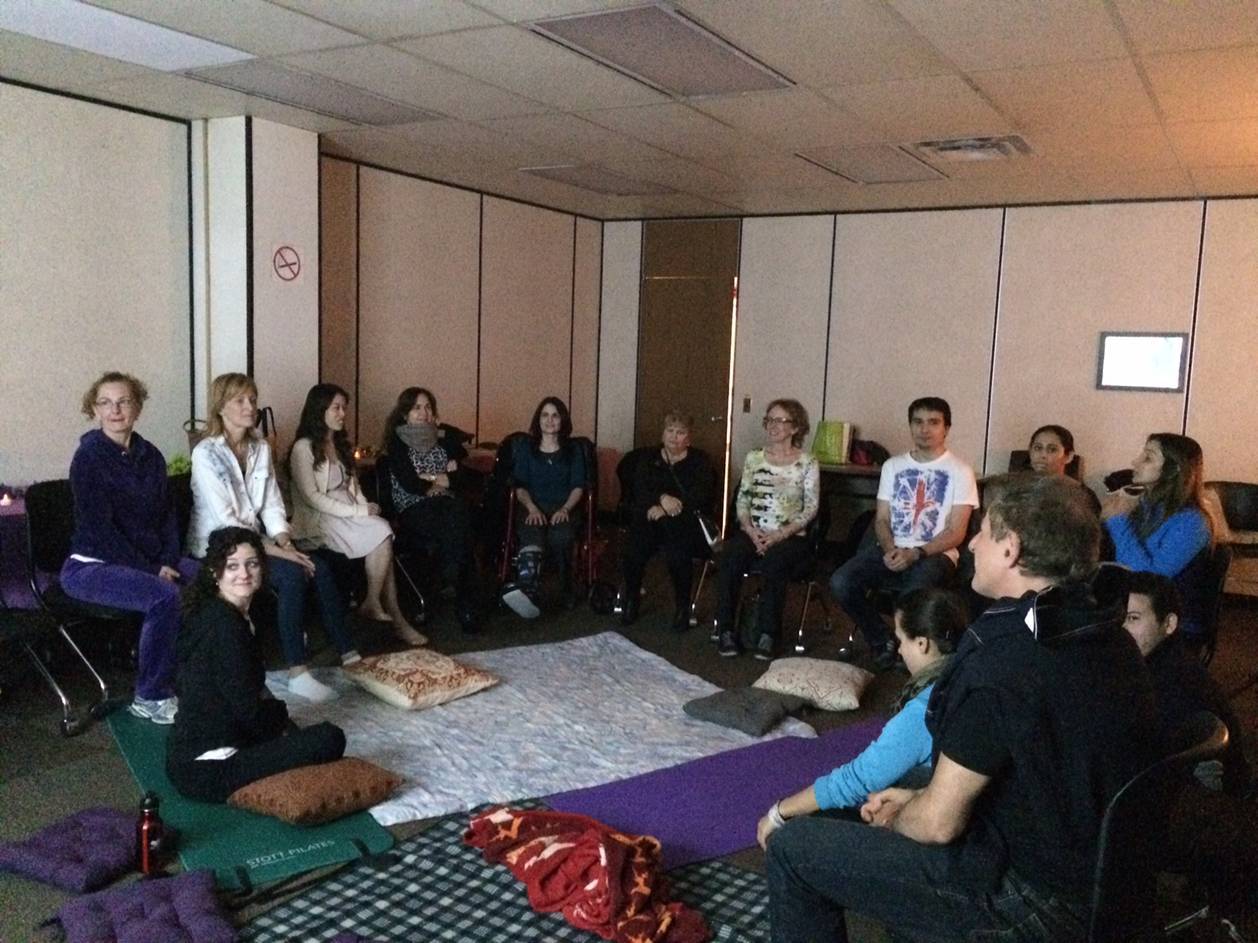 On October 23, the Raelians in Toronto gave the second part of a series of three presentations at the University of Toronto, under the theme: “Meditation, The Key To A Peaceful World”. The audience included people who had never meditated before, and others who were familiar with meditation with some practicing meditation regularly.

However, everyone seemed very interested in learning more about the benefits of meditation. The latest scientific discoveries in the field were presented, followed by scientific video clips supporting the topic of the meeting.

After this informative aspect, the audience was offered to experience a variety of meditations from simply breathing, the AOM and an introduction to the sensual meditation.

“The audience enjoyed the workshop and wanted to continue. We then let them know the importance of practicing these meditations daily”, explained Patrick Rhein, organizer of the event. 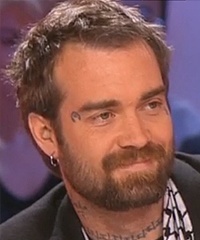 Kenneth Nichols O’Keefe (born July 21, 1969) is an Irish-Palestinian citizen, activist and former United States Marine and Gulf War veteran. He attempted to renounce US citizenship in 2001. He led the human shield action to Iraq and was a passenger on the MV Mavi Marmara during the Gaza flotilla raid. He said that he participated during clashes on the ship including having been involved in the disarmament of two Israeli commandos. He declares that the United States is the biggest terrorist in the world. 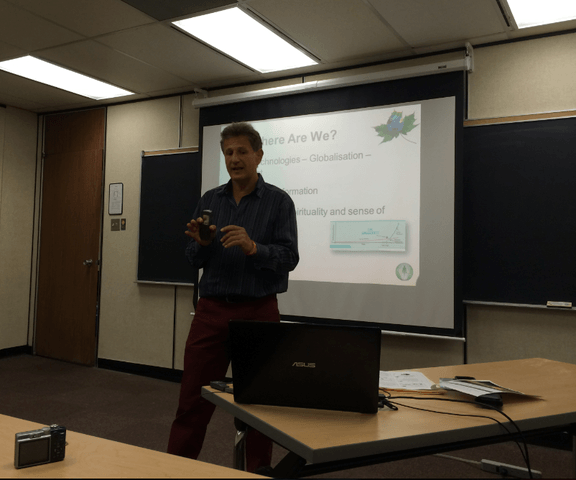 On September 27, the concept of Paradism was presented at the University of Toronto. Many of the participants who joined the conference was due to the posters that had been placed on campus.

According to Patrick Rhein, the leader of the Raelian Movement for the City of Toronto and also the speaker at the event, mentioned that  “by the amount of questions asked it was extremely evident that the audience was totally captivated by the concept of Paradism”. Two main domains had been addressed, robotics and 3D printing. “We have described various applications of biotechnology, from personal use to industrial use as well as how to change our mindset to create a new reality, and save our planet”, mentioned Rhein. Mark Proulx, a robotics engineer with over 20 years experience, has also demonstrated that it would be possible to implement Paradism quickly if politicians, scientists and citizens would join together to achieve it.

More conferences of this kind will be held across Canada to show the public how Paradism could make our world a paradise where work and money would no longer exist. 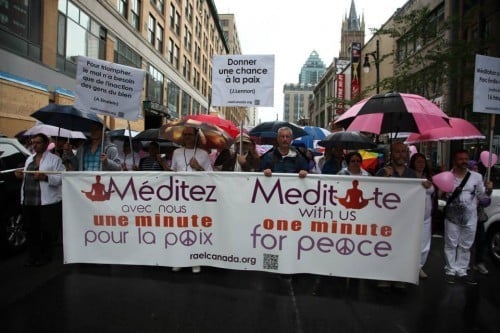 On September 21, the Raelians of Canada supported the “International Day of Peace” from coast to coast, by integrating the action “Meditate with us One minute for Peace” launched two years  ago by Rael.

For this occasion, about fifty Raelians across Quebec rallied for a peaceful march all along the busiest street in downtown Montreal. During the march, peace songs resounded in the city, interspersed with moments of meditation directly on the street. “The event ended with a “One minute meditation for peace” in a park where we previously invited people by holding out an invitation card”, explained Melove, organizer of the march.

“In Toronto, we were in High Park to guide a global meditation for peace, synchronized with various other groups like Unify,” said Patrick Rheins. In this natural woodland in the middle of the largest city of Canada, a Raelian Guide, Diane Brisebois conducted a wonderful meditation with images that persisted in the minds of participants.Read More

The minister in charge of government administration and the ongoing revision of programs and also president of the Quebec treasury board, Mr. Martin Coiteux, unveiled in September 2014 the establishment of the commission for the permanent review of programs. This commission’s goal is to allow a re-positioning and the implementation of ongoing evaluation processes for refocusing state action towards priority programs and to where the needs are greatest.
Read More

The superheroes of small and big screen fascinates and entertains millions of people around the world eager for extraordinary adventures. These fearless and blameless heroes are often associated with the world of science fiction, and seem to us, mere mortals, inaccessible.

Fortunately, the annual Comicon Convention fills this gap and allows fans to get closer to the actors who are behind these living legends. The Comicon 2014 Convention this year was held at the Palais des Congrès in Montreal from the 12th to 14th of September.  With such a large crowd in attendance, it was very obvious of  the popularity of superheroes.

Alain Moreau, a sedulous Raelian for this type of event, brought along with him a small team of Raelians  to hand deliver Rael’s book “Intelligent Design” to personalities they  managed to meet, all the while trying to manoeuvre their way through a very dense crowd of people.

They gave the  books to five of the actors,in which three of them have played important characters in the Star Trek Next Generation series: Levar Burton (Geordi La Forge), Gates McFadden (Beverly Crusher) and Jonathan Frakes (Will Riker). And thee other two which received the books were: Tricia Helfer, the Cylon No. 6 of “Battlestar Galactica” and Stephen Amell of “Arrow” series. 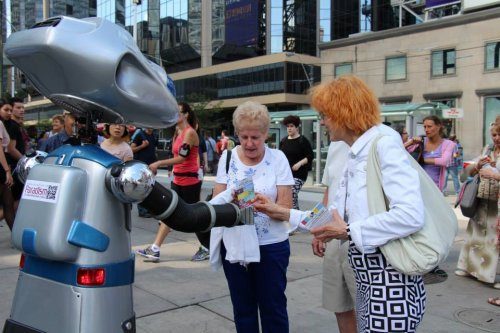 What a frenzy around Sico, this friendly robot that helped spreading a new approach to solve our future … with an iron fist, in the streets of Toronto, last Wednesday, September 3rd. Nicole Bertrand, Bishop Guide and spokesperson for the event, first offered us, in press conference, a very convincing summary of what means Paradism and its applications.

She stated that Paradism is a new socio-political system that wants, among other things, to help replace human workers by robots, a global social phenomenon that will quickly replace our humanity competition and greed by cooperation and collaboration. This transformation is not a dream of science fiction, as pointed out Mrs. Bertrand. We have already developed all the necessary technology and we could get there in just a few years. She added: “If we are treated as dreamers, we dream with open eyes … this is already happening now.” She also quoted Rael, founder of the Paradism, which states: “There is no reason to be poor with our current level of technology.”