MONTREAL, Oct. 29, 2012 – “It’s been more than 15 years since the ‘Truth and reconciliation commission of Canada’ was created to the reoccurring problems of physical and sexual abuse in christian schools, and still no concrete actions have been taken” declares Rodolf Samson, spokesman for the Raelian Movement of Canada with the First Nations.

“Numerous autochthonous and indigenous school children recall having been beaten for having used their native tongue and have lost contact with their parents and culture. This inheritance of abuse and isolation was mentioned by the First Nations’ leaders as being the first cause of the epidemic of alcoholism and narcotic use that devastates natives and their reservations.”

Following the report of the Commission on February 24th, 2012, Rael, spiritual leader of International Raelian Movement, expressed his surprise with the timid proposals that were made from this Commission.

TORONTO, Oct. 22 - The Ontario government now allows transgender and transsexual people to change the gender on their birth certificate without surgery.

«Ontario is a model of respect for differences across Canada and throughout the world» says Frédérique, spokesperson of Aramis Canada, being the first province in Canada to abolish the [...]
Read More

MONTREAL, Sept.15, 2012 – According to a statement released this morning by the International Raelian Movement (IRM), Raelians worldwide support the decision of Gloria Taylor to end her life through assisted suicide.

“Gloria suffers from Lou Gehrig’s disease, a degenerative illness that science can’t yet cure,” said Marc Rivard, M.D., IRM leader for Canada. “We are one with the universe, and we were created for enjoyment and pleasure, not to suffer. Science is unraveling more and more about human beings and providing a much better understanding of the universe, of which we are a part. The time has come to update our laws!”

An August 10 ruling by the British Columbia Court of Appeal allows Taylor the right to end her life. It confirmed the exemption granted her by the trial court after her exemption was overturned in mid-June under a Canadian law prohibiting assisted suicide.*

“We are thrilled with this victory!” declared Sylvie Chabot, the head of GoTopless in Canada and woman priest in the Raelian Movement (rael.org). “Thanks to the amendment to the Toronto city code, at last, women are truly free to exercise their topless rights anywhere they want in the province of Ontario!”

In June of 2011, the city of Toronto had refused to issue a permit to GoTopless for their topless event at the Ashbrigdes Bay Park because the presence of bare-breasted women at the planned event violated a Parks Bylaw 608 clause calling for ‘appropriate bathing attire’.

GoTopless had written a letter of complaint to Ms. Shakir Director, Office of Equity, Diversity & Human Rights to report this case as gender discrimination. Indeed, women’s bare chests were considered “inappropriate bathing attire” but not the men’s.

“Last week, GoTopless received a letter from Ms. Shakir, letting us know that Mr. Mark Lawson, Manager of Customer Service for the Parks, Forestry and Recreation Division had been consulted regarding our last year’s denial of permit and that section 608 of the Municipal Code had been reviewed/amended” explained Chabot.

Mr. Lawson also confirmed to the National Post that the decision not to allow them to have a permit may be seen as discriminatory based on gender.

TORONTO, Aug 13th, 2012 – As GoTopless organizes its 5th year of protests worldwide for women’s equal topless rights, many women will gather in the streets of Toronto to expose the city’s discrimination of women’s topless rights established in 1996.

Last year, the Toronto Parks, Forestry and Recreation Department has refused to issue the local chapter of GoTopless a permit for their rally on the grounds that the topless women participating in the event would violate the “proper attire”, code that it is still in effect this year.

Sylvie Chabot a Raelian woman priest, head of GoTopless in Canada reacted by saying: “The rule is in pure contradiction with the provincial ruling of 1996 that officially granted women the right to go topless in the province of Ontario.” (ref: Gwen Jacob was acquitted on December 9, 1996 by the Ontario Court of Appeal, http://www.gotopless.org/files/2012-07/Queen_vs_Jacob.pdf )

“If ‘proper attire’ means that women have to hide their chest in Toronto’s public parks and beaches, then men must be forced to do the same on the basis of gender equality!” Chabot added, referring to the very constitutional argument Maitreya Rael, spiritual leader of the Raelian Movement, made as he founded GoTopless in 2007.

“All or none, Toronto!” exclaimed Chabot and added that the men participating in the rally would be wearing a bikini top to support gender topless equality in the current discriminatory legal climate.

World Swastika Rehabilitation Day (WOSRED) will be celebrated on June 26 through marches and informative events worldwide.
WOSRED was launched last year by Rael, spiritual leader of the IRM, in order to educate people about the true meaning of peace and harmony of the swastika, this ancient symbol regretfully hijacked by the Nazis.

Raelians are often questioned about their symbol, in which a swastika intertwines with two overlapping triangles that form a six-pointed star. People, especially those of Jewish origin, obviously disturbed to see a swastika intertwined with a Star of David, change their perception when they’re told it was used for millennia and is still used today by many peaceful religious groups, especially in Asia.

On June 26, the organizers are expecting hundreds, or, hopefully, thousands of people to celebrate World Swastika Rehabilitation Day in the streets of Miami, Houston, San Francisco, Los Angeles and New York in the United States; in Vancouver and Toronto in Canada; in Sydney, Melbourne, Brisbane and Perth in Australia; in Zacatecas, Veracruz and Mexico City in Mexico; in Milan, Italy; Lyon, France; and Rotterdam, Holland.

The Proswastika group initiated by Rael now includes Buddhists and Hindus, who have used the swastika as a symbol since the very beginning of their religions.Read More

TORONTO, Aug. 23, 2011 – After learning that women will be going topless during the scheduled activities, the Toronto Parks, Forestry and Recreation Department refused on July 21 to issue an Aug. 28 special event permit for the Canadian chapter of U.S.-based GoTopless.org.

A non-profit organization, GoTopless holds annual protest/educational events worldwide to proclaim that women as well as men have a constitutional right to go topless in public.

The Canadian chapter wanted to hold its annual protest in Ashbridges Bay Park, but will now do a protest march instead, assembling at the edge of the park.

“This permit refusal represents gender discrimination, in which men are treated differently than women,” said GoTopless spokesperson Diane Brisebois. “The authorities would rather have us hold this event on Hanlan’s Point Beach, a nudist beach on Toronto Island, but that defeats our purpose. The authorities maintain that top free women are nude, but that’s exactly what we want to change. There is not more nudity in revealing one’s breast than in revealing one’s arm and this is what Gotopless Canada is trying to address.”

For Rael, spiritual leader of the Raelian Movement (rael.org) and founder of Gotopless.org, the equation is simple: “As long as men can go topless, women should have the same constitutional right or men should also be forced to wear something that hides their chests.” 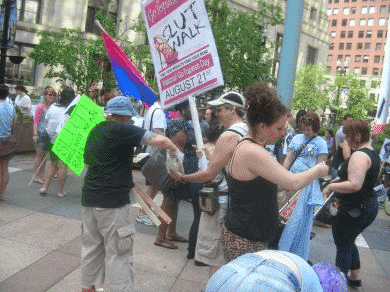 Raelians in Chicago and Toronto took part in local Slutwalks, a new event that was initiated after a Toronto police officer stated that “women should avoid dressing like sluts in order not to be victimized” (http://www.bbc.co.uk/news/world-us-canada-13320785).

Maitreya Rael had commented on this saying “I strongly support this movement. It’s this type of conservative police officer, poisoned by primitive religious values and prejudice, who can turn into one of the ‘dress police’ like those in Iran, who end up forcing women to wear veils or even burkas. Women have the right even to go topless or nude without being physically abused or raped.”

Montreal, November 25th, 2010 – As part of the “International Day for the Elimination of Violence against Women”, Clitoraid invites the public to a silent march to be held Sunday, Nov. 28th in Montreal, Quebec, Ottawa, Vancouver and Toronto. (* see details below).

The United Nations General Assembly, in 1999, designated November 25th the “International Day for the Elimination of Violence against Women” (http://www.un.org/depts/dhl/violence) and invited governments, international organizations and non-governmental organizations to organize activities on that day designed to raise public awareness of the problem.

Unfortunately, in the list of acts of violence against women, female genital mutilation (FGM or “cutting”) appears as the most common.

The World Health Organization estimates that worldwide, 100 to 150 million girls and women have undergone female genital mutilation. Each year 2 million more girls are likely to suffer the same fate. Most of them live in 28 African countries, a smaller number in the Middle East and Asian countries. But there are more and more in Europe, Canada, Australia, New Zealand and the United States of America.

In May 2006, in response to those stunning statistics, RAEL, the spiritual leader of the Raelian Movement, founded CLITORAID (www.clitoraid.org) a private non-profit organization whose objective is to raise public awareness of this terrible reality. Clitoraid’s main purpose is to raise funds to help African women, with very limited financial means, undergo surgery towards the reconstruction of their clitoris. This technique, which was scientifically validated by a French surgeon, currently allows women of all ages who have suffered “cutting”, to regain clitoral pleasure and to feel whole again.