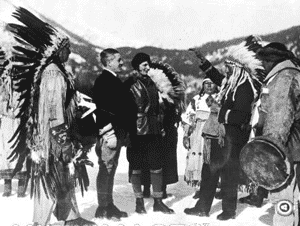 A truth and reconciliation commission examining what native leaders call one of the most tragic and racist chapters in Canada’s history has begun. The commission will study Canada’s decades-long policies that removed Aboriginal children from their families to force Christianity upon them. The state-funded religious schools were often the scenes of horrific physical and sexual abuse. From the 19th Century until the 1970s, more than 150,000 aboriginal children were required to attend Christian schools in an attempt to rid them of their native cultures and languages and integrate them into society…. We see here again the same despiteful technique used by Christians on every continent, Kama, Ixachitlan… So much suffering in the name of god again!

The federal government admitted 10 years ago that physical and sexual abuse in the once-mandatory schools was rampant. Many students recall being beaten for speaking their native languages, and losing touch with their parents and customs.

That legacy of abuse and isolation has been cited by leaders of native communities as the root cause of continuing epidemic rates of alcoholism and drug addiction on reservations.

The commission, which is in the early phase of its research, will spend five years travelling across the country to hear stories from former students, teachers and others involved in the so-called residential schools run by the Roman Catholic Church and various Protestant denominations.

Canada’s aboriginals – who number nearly one million – remain the country’s poorest and most disadvantaged group, with a life expectancy five to seven years lower than non-natives. Suicide rates are three times higher than the national average, and teenage pregnancies are nine times higher…..

Rael sent his warm support to the head of the Native association and made the following comments:
Apologies and money are not enough, the Canadian government should finance schools to reeducate all the so-called “native” people, (in fact the only real Canadians), to teach them their original culture, religion and languages, making these languages mandatory first language in these schools, with English or French as second language only and to be learned only later. This should include all schools, including kindergarden and primary schools which should be only in “native” language. Like that it would not be only political bla bla but a real action to restore and reinstate the ‘native ” religion” of this wonderful culture. And in parallel we should engage in a large action promoting apostasy from Christianity which was forcibly imposed on these people, telling them the truth, which is that their colonized and abused ancestors cannot rest in peace as long as their grand children continue to belong to the religion of their tormentors and colonizers.