Hatred in the streets of Montreal, Canada

Home › Blog › Hatred in the streets of Montreal, Canada 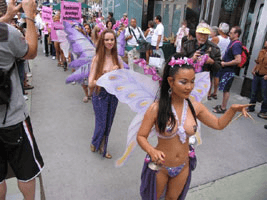 On March 8, about 50 raelians participated to the women’s day demonstration in Montreal.

Veronique, the leader of order of angel in Canada tells us how it went :

“We were there wearing beautiful hats that we had made as we wanted to express our femininity. It started nicely despite the cold, we were feeling solidarity with the other associations walking up the street of Ste Catherine. Suddenly, about half way, a group started to shout ” A bas les raeliens” which means something like “get off raelians”. They were people from associations claiming on their posters the respect of human rights and of women’s rights, tolerance and non-violence. A mother even left her child in a pram to come and yell at us derogatory words about our religion. After a while most of the participants were gathered around us telling us we have nothing to do there. Where were we? Was it a march for tolerance towards women? We found ourselves in the middle of a hainous crowd!.”

The Prophet Rael made the following declaration after learning about the event:

This Anti-Raelian hatred corresponds exactly to what occurred when crowds looked at, and supported with pleasure, the massacre of the first Christians in the Roman arenas. As well as with the anti-semitic acts of hatred in Nazi Germany. Nothing new!!
Nowadays, as it is politically correct to not persecute the Jews, the Blacks or Homosexuals, the only targets which remain, or the only possible scapegoats, are the religious minorities which cause a disturbance, in particular the Raelians… the thirst to hate with impunity which relies on the lowest of instincts of each human being encouraged by the evolving media is not astonishing or new. And that is not attributable to any particular media actions like the burnt crosses… Well before the crosses, when we collected food for the homeless, the reactions were the same. It is necessary to keep a panoramic vision in time.

This rejection is a necessary step. The more a society reacts with hatred towards a minority, the more this minority has the chance to be accepted in the future as a beneficial one. It is certain that at the moment when people are thrown to the lions, or Jewish storefront windows are broken, or when the trains take them to the crematoriums, we feel revolt, despair, and have difficulty in accepting that. But in the long run the good ones always triumph and the most persecuted always become the strongest and , the ones which forge the future of Humanity. Who would have dared to tell the Romans who threw them in the arenas, that Europe would be Christian one day and that Rome would be their spiritual capital? Who would have dared to tell the Nazis who escorted the Jews to Auschwitz by stripping them of all of their dignity that one day the Jewish people would have their independent state and would influence the most powerful countries of the world and thus the world politics? Who would have dared to tell those which sold and whipped Blacks who were reduced to slavery and sold as animals, that in the United States they would have the same rights as white people and could be Ministers or presidents of great world powers? Certainly it is more difficult to live in times of rejection, but at the same time it’s much more exciting than living in the comfort of general acceptance. This has the advantage of testing our faith. For sure the weakest could be tempted to leave us, but that will allow the strongest among us to be even prouder to be Raelian and those which are in between the two to be reinforced.

The option to avoid participating in certain public demonstrations in certain hostile countries seems desirable to me. In any case the great causes that we participate in, gay parades, racism, women’s causes etc. are not really necessary to our development – we are not really useful there. They are so politically correct that, even if old traditional conservatives are against these causes, they do not express it in public in order to be socially correct. But it is only a cover: at the first opportunity, anti semitism, racism, homophobia which was only dissimulated will re-appear and acts of violence will strike Jews, Blacks or homosexuals. But in commun and publicly nobody expresses it. And thus social and legal acceptance of these minorities are then guaranteed and it is not really required to take part in it. To join a demonstration which promotes of what is politically correct and “fashionable” is absolutely non-revolutionary.

It is also necessary to wonder why we have this desire to join such demonstrations: to find ourselves in a place where we are finally accepted by a larger group with values which are in fashion. And what happens: the crowd rejects those which try to use fashionable means to pass their unfashionable minoritary values. Therefore, we have neither our place nor utility there. In fact, the desire to take part in it comes from the desire to find allies which does nothing but prove our weakness. It’s better to remain faithful to ourselves and to return to our essential concerns and leave the malleable and media-controlled crowd to their manifestations which are accepted publicly by the majority and are in fashion. We have nothing to do with trends and great public movements in favour of what is behaviouraly and “socially correct”.

It was admirable and grand to protest for the respect of Jewish people in 1938 in Germany, for the respect of homosexuals when the majority was for their public lynching, against slavery when half of Americans traded Blacks as cattle… but to protest today for these causes is not admirable considering that there is unanimity around them even if it is once again hidden – many are still homophobic, anti-semitic and racist. The famous: ” I’m not racist, but I don’t want my daughter to marry a Black”or” I am not homophobic but I would not like my son to be gay”… the baseness of these people which are only human by name is equal to their hypocrisy.

Therefore it is better to flee these large fairs where any racist, anti-semitic, homophobic and conservative grocer, can walk with others “to support” those which he loathes and where he gives himself without the least risk the illusion of being a great revolutionary. How many of these people would have done anything to protect them in a time when hatred against those which they claimed to defend was politically correct? How many Schindler’s would there have been when the Nazis were supported by 80% of Germans in a consensus of hatred? How many people would have protested for women’s rights when they did not have any rights, not even the right to vote? All you have to do is look at Muslim countries …

These small Sunday heroes who march while feeling revolutionary when all they defend is what everyone is ready to admit are as ridiculous as they are stupid and cowardly. The proof is that they are ready to hate and even to encourage violence against any real minority in difficulty which would join them. Pathetic. We should not have anything to do with them!

Our actions must be limited and addressed to individuals and far from great and crowded manifestations. The internet is an instrument of choice and an antidote to the crowds who are conditioned to hate by the media.

Public actions are still possible but only for really revolutionary causes which do not collect general approval.

Finally it should never be forgotten that hatred is always a demonstration of interest which always leads to love. Only indifference is terrible. All those which hate us today could eventually become our fervent supporters… If tomorrow those who threaten us with violence acted on it by sending a bomb and killing Raelians at a public meeting, the public opinion would be immediately turned around and we would have general collective sympathy.

It is obvious that we must do everything so that such a drama never occurs because we do not want to have any martyrs.

But to remain ourselves, to avoid large, politically correct crowd demonstrations and to remain focused on the personal diffusion and regular private meetings through the Internet are excellent means to guarantee the growth of the Movement while waiting for the events that our Creators will use one day to accelerate the process.