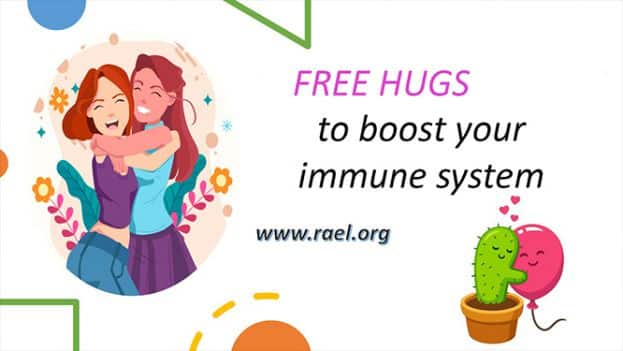 Las Vegas, November 18, 2022 — Rael, spiritual leader of the Raelian Movement, has recently asked Raelians to intensify their ‘Free Hugs’ campaign worldwide. “In a world where social distancing is still considered the modus operandi and best way to avoid infection, it is incumbent on us to help educate the public on how physical contact and giving a long embrace does strengthen the immune system,” said Rael.

“The effect of hugging in lowering the severity of a viral infection has been studied and published,(1)” stated Brigitte Boisselier, PhD, Spokesperson of the International Raelian Movement. “How such protection is conferred is not well established however. It could be the result of its stress-reducing effect combined with the repeated activation of the immune system caused by its exposure to a variety of bacteria and viruses. According to the authors of the study on infected participants, greater perceived support and more-frequent hugs before infection each predicted less-severe illness signs,” she added.

Two years ago, while multiple governments were imposing home confinement under penalty of prosecution, Rael decried the violation of our freedom and reminded Raelians of the importance of hugging to strengthen their immune system. “During their ‘Free Hugs’ campaigns, Raelians witnessed a huge public appetite for human contact in the streets and had full-on Hug-o-thons surrounded by happy humans re-connecting,” stated Boisselier.

Through the unrest experienced in the past year, Raelians worldwide have consistently maintained their street peace meditation actions, inviting passer-byes to join them for one minute of meditation to help Humanity heal from this global fear, anxiety, and despair.

“The ‘Free Hugs’ campaign extends this outreach and is our contribution for a healthier and happier society,” concluded Boisselier.