U.S. deserter to be deported from Canada

Home › Blog › U.S. deserter to be deported from Canada 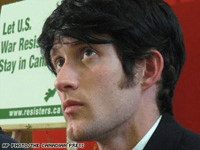 Sgt. Corey Glass, 25, is to be deported from Canada for having fled there to avoid fighting what he knows is an illegal war in Iraq. He will be deported June 12 (2008) unless Canada changes its ruling. Of the 40 U.S. deserters who have applied for asylum in Canada, Canada’s high court has heard five cases and refused all of them.

Rael sent the following comment: “These deserters and everyone else who refuse to fight are the most courageous Americans and should be a model for all young Americans. Canada should be ashamed for not granting them the statute of political refugees.”

According to the laws of many countries, a deserter can even face death for refusing to fight. When we look at things from a humanitarian point of view, this is madness. Simply put, the US and other countries can kill those who refuse to kill. These are often the same countries which also use capital punishment – killing those who kill.

So what or who decided upon this insane “reason”? It’s always those who want to maintain power and wealth, of course.

The art of the politician is to convince a population that they have something to fear from another people. (that’s how they get elected, too) If someone refuses to fight and gets away with it, there will certainly be more who will refuse. Governments don’t want that, do they? This is why it’s so important to support anyone who follows their conscience and refuses to fight – especially in illegal occupations like Iraq.

The Raelian Movement supports the idea of military which is a “keeper of the peace” but never will we support Imperialistic Regimes such as the U.S. and U.K. Keepers of war must be abolished and replaced by keepers of peace. Politicians cleverly disguise wars of aggression as missions which “will ensure peace”. All one needs to remember is President Bush’s words “pre-emptive strike” – just a clever way to justify attacking another country.

When asked how the US military deals with deserters, Maj. Nathan Banks said “The first thing we try to do is rehabilitate and retrain the soldier to see if we can keep him. Remember, we’re at war, so everybody counts. When you decide to desert, you let everybody down.”

The Raelian Movement very, very much disagrees. If we agree to fight, it is the whole of humanity who we desert. Furthermore, if you succeed at convincing someone it is ok to kill someone, you have DEbilitated that person. The only people you would let down by refusing to fight are those who want to maintain power over you. Should you refuse to fight, you would actually inspire and “truly rehabilitate” more and more people – until a world conflict would become impossible. Nice thought, don’t you think? 🙂